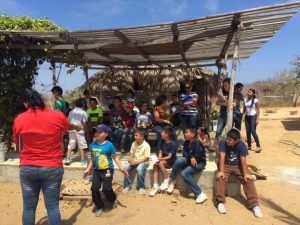 The boys enjoyed sleep away camps over the spring break. The teenagers had a change of scenery going to La Paz where they camped with other teenagers and were divided into co-ed teams competing in several different events. The camp incorporated music and teaching on biblical values. Casa Hogar staff member Miguel and his wife accompanied the teens as chaperones. “It was an important trip for me to take with the boys because it gave me the opportunity to spend time with them as a brother and encourager rather than a Supervisor. I had a chance to talk and listen to several of the teens about their lives, their pain and their future”. The teens came back exhausted but edified! It was great for them to spend time with other teens in a co-ed environment. The younger boys camped at a nearby ranch with the majority of the Casa Hogar staff. Being separated from the teens gave some of the boys an opportunity to step into a leadership role in their teams.
Casa Hogar rarely has the luxury of working with an empty house and its skeleton crew (those who did not go camping) advanced with cleaning, organizing and maintenance projects. 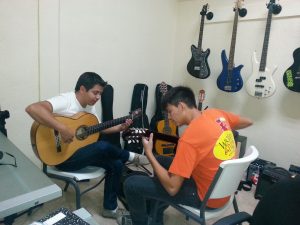 Repeat donor Heidi Rumsey and family have spearheaded a new program at Casa Hogar, Music Rocks in memory of their friend Sam Shelton’s love for music and family. Several musical instruments were donated along with the resources required to hire Music Instructors. Ismael and Jonathan have started practicing with their new instructor who is an expert flamenco guitarist. These two boys are learning to read and write music, a talent that will serve them well in their musical endeavors. They are very pleased with this new opportunity despite their swollen hands. Casa Hogar is currently seeking the right instructor to teach the younger boys some music basics including the Recorder (internal duct flute). The goal with the little ones will be to expose them to a basic instrument and identify who shows interest in learning to play additional instruments. 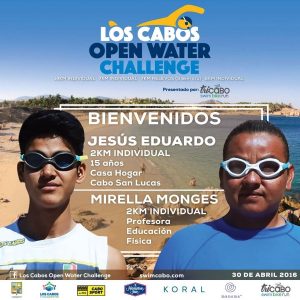 Casa Hogar Sports Instructor, Mirella has been training with 15-year old Lalo for the past 6 weeks in preparation for a 2 km swim race at the Los Cabos Open Water Challenge occurring Abril 30th. Lalo, a natural athlete who has exceled in both soccer and volleyball, is new to the world of swim competitions. Mirella started the training with technique, stamina and finally speed. Student and instructor have been working together and gradually increasing their distance in their daily routine. Mirella claims that Lalo is already faster than her but she still has the upper hand on stamina thanks to sound technique. However, Lalo’s learning quickly and the sense is that his championship pedigree will transfer over to the water quite nicely! 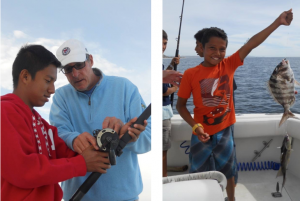 Thank you to all volunteers!

The boys of Casa Hogar continue to benefit from the creative generosity of friends and donors such as the Peterson Family, Katie Makelki, Susan Auerbach, Barbara Ruley, Emily and Tim and many more! Earlier this month Paul Garcia took 4 well-deserving teens and staff member Miguel for a morning of fishing on the Sea of Cortez aboard a 60-foot “Six Pack”. Trigger fish were what were biting but by their smiles you would have thought the boys caught marlin. The boys are on their best behavior during outings like these and the reports are always very, very positive. Leonardo, Jose Guadalupe, Emmanuel and Miguel scored top marks for their courtesy and social interaction with their hosts. Rewards like this are a great incentive for the kids and teens to follow the basic guidelines of the home to earn the opportunity to participate. Thank you! 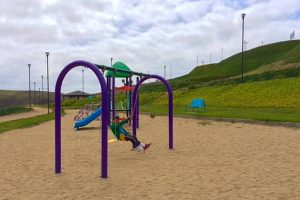 Zoren is back in Cabo after a long road trip to Tijuana. His scheduled surgery was a success and the medical staff at Shriner’s Hospital is very pleased with his progress. His right leg is in a new cast for the next two weeks in preparation for his follow up visit to Shriner’s. The expectations are that Zoren will be back on his feet soon. This is a big year for this growing boy. He’s going to be guided by the Casa Hogar staff to become more proactive with his hygiene, grooming and chores. As his mobility increases the desire is for Zoren to take important steps to become more independent. He is a bright boy full of social gifts being prepared for a great future ahead!

As announced March 3rd at the Gala Fundraiser, Casa Hogar is receiving Architectural support from the graduating class of the Architecture program of San Jose’s ITES University. The 7 graduating students in their final semester of studies have completed the first stage of their thesis work, the Pre-design of Casa Hogar Girls. They have now moved to the Executive Project that includes all the structural plans and the finishing details. The final presentation will occur in early July!